I started with a taste for lawns while playing rugby, since we trained on dirt pitches and it was difficult to play on a good course in Seville except for La Cartuja.

After finishing Agricultural Technical Engineering, I decided to go to the UK to do BSc. Sports Turf Science and Management at Writtle College, and thus do the 3 things that I liked the most in life, such as: playing rugby, studying lawns, and drinking Guiness, although in reverse, hahahaha (later I did it out of passion Master in Plant Health, and by requirements of the work that I perform in the Club, Master in PRL and degree in Engineering in Industrial Organization).

After finishing my studies in the UK and returning to Spain, I began to work for 5 years on golf and sports courses in general with JERSA, with important works such as "La Grajera", "Los Barrancos de La Zagaleta", "Centro Nacional de Golf ”Or“ Costa Esuri ”. After a health problem with my daughter, I needed to be close to her, and I had to look for work in Seville, and that's when the opportunity arises at Sevilla F.C. and I was selected as Grounds Manager in 2006. After some disconcerting beginnings, due to the difference between golf and soccer, I am acclimating myself to the world of soccer (even today I am still acclimating myself).

At first, we had serious problems with the grass at the “Ramón Sánchez-Pizjuán” Stadium, especially with the passing of summer. Due to the fact that the grass installed was C3, the high temperature forced an excessive consumption of water, localized irrigation due to water deficit and constant treatments against diseases. Although well water is not a problem, nor is it a good that abounds in Seville.

This problem was solved in 2009, which was the last major reform carried out to date, in which we installed Tifway 419 hybrid bermuda shorts certified with the NOVOGREEN company and in which the last 10cm of siliceous sand had previously been replaced. After this installation, the bermuda grass has been maintained in summer with a high quality and with a more bearable maintenance.

Overseeding is done in early October every year with perennial lolium. There are times that we have mixed it with poa pratensis, or replanted with lolium multiflorum in winter, although it is still the best option for our taste, perennial lolium, always mixing several varieties with different resistance to diseases. Another of the great problems of overseeding is the great competition that lolium grass has with bermuda grass in the establishment, since bermuda grass, each time remains active until later, being able to become active in December.

The RSP Stadium is an open and well oriented north-south stadium, with few shading problems. He only has problems in the southern zone for 3 months of the year. With three units of lights, it is enough for its growth and solve that problem. The Stadium has a good constructive profile. The field was built in 1998, by the JERSA company, and the truth is that it is a magnificent profile, which today continues to work quite well, currently maintaining excellent infiltration and drainage capacity. 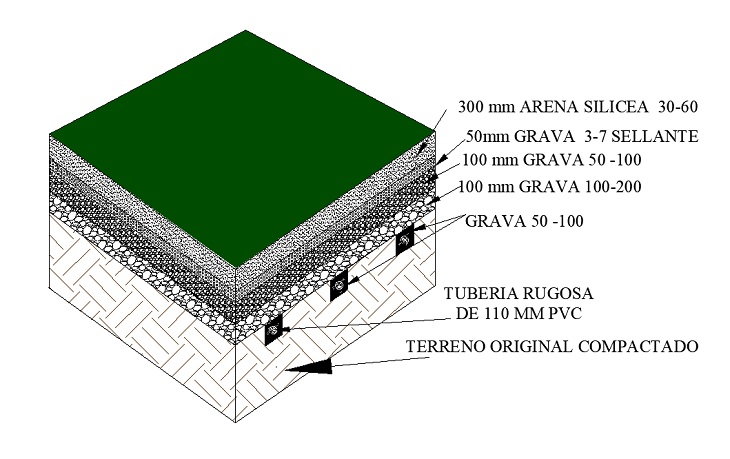 As a curious subject, the stadium's drainage water collection well is at a lower level than the exit of the street, so it must be pumped towards the street collectors, being a handicap in times of heavy rain and the sewers it is full, it has a hard time to evacuate the drainage water. 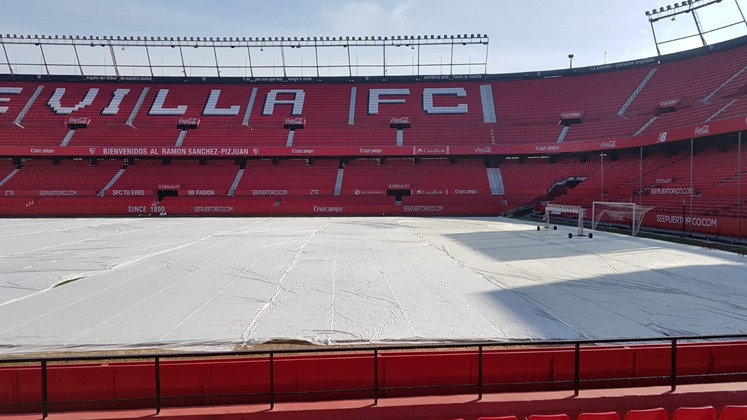 Currently, weekly planning depends on the calendar, although usage is usually respected and little training is done on the stadium lawn, especially if the team continues to be immersed in the 3 competitions. There are times when it has more than 5 uses in 10 days with a non-active growing season, so the quality of the grass shows it. The main problem that I see in the bermuda fields today is that you have to be patient in the transitions, especially in the October replanting. There are many people who have a hard time planning an annual field trip from a Bermuda field. Winter grass needs a period of between 6-10 weeks to fully establish (tillering, emission of rhizomes or stolons), it is as if someone wants an older child from the first ..., the only option is to adopt (place sod), if you want have it since baby, you have to disembark and go step by step. The behavior that it subsequently has seems brilliant in my opinion, since it looks like a natural hybrid grass with a great capacity for hours of play.

Although the stadium lawn is 105x68m, it has become very confined, with a few meters on the outside (2 meters on each side), which is an advantage due to the pressure on the game that the fans can exert, but a great disadvantage to give laps with the machinery, alternate hard work outside during training sessions and extract sod that goes unnoticed inside the pitch. 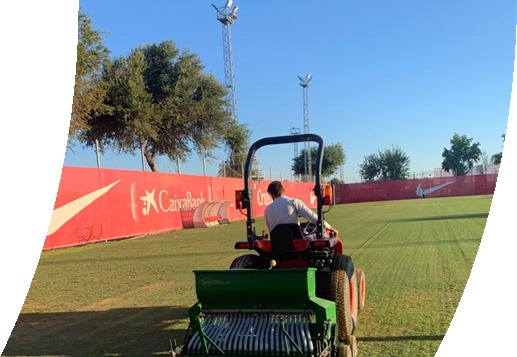 Of the current staff of the Stadium, I am very grateful to my teammate Antonio Delgado, assistant at the Stadium, who is the real architect of the RSP looking good. There are usually one or two other colleagues on the Stadium team with him, although there are times when he is alone. Almost every morning we have a brief meeting and we are looking at the strategy to use according to the results. The weekly planning is carried out jointly according to the wear suffered, period until the next game, time of year and weather forecast. In a more favorable case, we carry out a fortnightly top dressing of 24Tm with subsequent puncture, choosing the thickness of the tines according to the time of year and recovery period until the game. During the very active growing season with the majority of Bermuda grass, soft verticutting is carried out to avoid “cushioning” of the Bermuda grass. As with humans, with the nutrition craze, I think plant nutrition is very important in the world of sports turf, and now I appreciate it more than ever.

I believe a lot in spoon-feeding by fertigation. I believe that constant and controlled nutrition avoiding growth peaks. 85% of the fertilizer is applied by fertigation, all aided by constant analysis of sap, foliar and soil every 15 days and water every 6 months. The nutritional balance is a way to avoid big problems later. All the fertilizers used are slow release and most of organic origin, since it is giving us good results at a minimum cost and we remain committed to sustainability. In this sense, we are following an integrated control strategy, based on nutrition and the application of biological products such as Bacillus, trichodermas, mycorrhizae, etc. To carry out this strategy, it is essential that the applications are carried out in an orderly and sequenced manner. 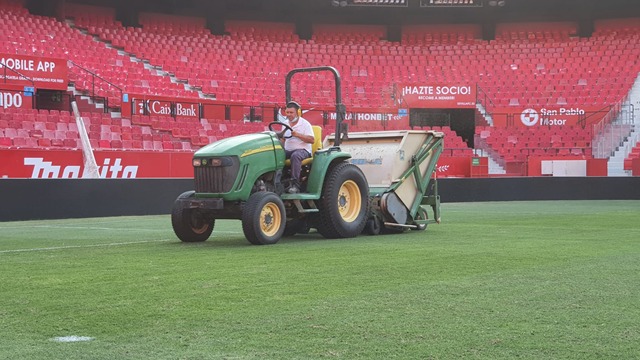 On the main maintenance tasks that are carried out in the RSP Stadium in case there is little time between matches are:

There are problems in the stadium lawn with nematodes (endo and ecto parasites), as occurs in almost all football stadiums, so we have to carry out constant sampling to control the threshold that affects the lawn and choose the application strategy . To control nematodes, organic products such as garlic extract and Paecilomyces lilacinus, and biostimulants (fundamental Ascophyllum nodosum) are used to strengthen the root. The effectiveness is good if it is applied preventively, which work for the moment, as long as we anticipate and do not arrive late to the problem.

With the rest of pathologies of fungal origin, most of the time it is caused by the weakness of the plant as a consequence of affectation by nematodes or by the high temperatures and high humidity in which the winter replanting is carried out, which cause high pressure of Disease: It affects the young plant, causing a high incidence of disease, such as blast and bipolaris, in shaded areas and magnaporte poae and pythium in more illuminated areas. When the disease has appeared, if a chemical fungicide is applied to try to control the problem.

The most important work carried out in the Stadium at the end of the season is the “Koro” milling pass. In this way, the bermudagrass is reactivated and it is possible to carry out a deep cleaning of the substrate and that the rhizomes and stolons of the bermudagrass grow without contamination on a clean substrate.

After this work, a more aggressive nutrition program is carried out to stimulate the reestablishment of the bermuda grass and from the complete reestablishment, a soft verticut program is carried out on alternate days and deep every 10 days, with waste collection. The fortnightly top dressing of about 24 Tm of siliceous sand is another of the operations that we find essential. 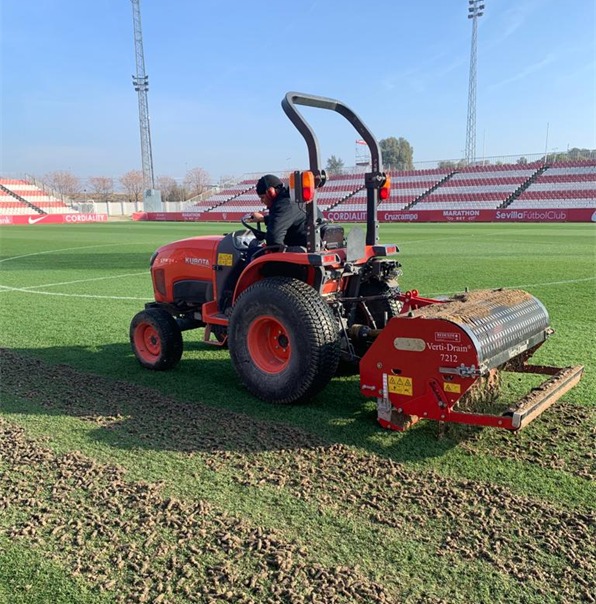 In Ciudad Deportiva there is another large group of outfielders led by José María Viondi, an assistant at the facilities. There is a group of 3 more gardeners on the Club's staff plus some more that are completed by ETT according to the needs. The maintenance of 8 natural fields of the same grass as the Stadium is carried out (only the “Jesús Navas” Stadium has drainage and a suspended water sheet type construction) and 4 artificial ones. The first team has 2 or 3, depending on the time of year. All the club's professional teams play on natural grass preferably.

Family reconciliation is complicated in this profession. The stress of the profession in which there are too many factors that are not controlled, plus the dedication and passion that is used, are hardly rewarded and affect personal life. In the end, your family ends up adjusting to you and your continuous absences. The lawn has no hours.

From here I would like to thank my family, Sevilla F.C. for their trust and support shown, to the great gardening team of Sevilla F.C. and Groudsman Sport magazine.

We are professionals in the sports grass sector. Specialized in soccer turf maintenance.